SMITH is delighted to present Afterimage, a solo exhibition by Katherine Bull. In this new
body of spectral paintings and light drawings, Katherine Bull takes her abiding interest in the
embodied mechanics of cognition and technology into new territory. Inhabiting the
interface between digital projections of human and non-human animals, she becomes a
medium between the animal, the human and the digital. The effects are eerily timeless,
hinting simultaneously at the past and the unfolding future.
Bull’s responsive drawing performances find form at the live interface between technology
and the moving image. The catalyst for these new works emerged from that process – the
embodied action of attempting to track bodies in motion across varying contexts and
spaces. In this instance, her chosen context is the online space of the Internet, the
ever-expanding coalescence of collective consciousness that reflects all human needs and
interactions.
‘I’m interested in how the Internet visualises the connection that already exists between us.’
Painting and drawing in acrylic ink and paint on cotton fabric from rear-projected moving
images, she has worked with live webcam feeds, animated GIFS and Instagram posts to trace
the life and movement unfolding in online digital spaces.
How do our animal kin figure in the evolution of this collective cognitive organ, this virtual
network of nodes, sensors and transmitters that connects billions of humans across the
planet? Bull’s decision to work with animals was intuitive, based on her sense of their innate
memory of the connection between all living things.
‘Could the internet bring us closer to animals? Could we have a more personal relationship
with animals because of tracking technology that enables us to follow not just any random
elephant or lion, but a particular animal with a life force and intelligence of its own? Is it
possible to build a relationship with individual animals – even though it is a virtual
relationship? If I sit and watch these creatures over time, does it evoke empathy?’

Live feed projections track the movements of animals at a watering hole on a game farm in
Mpumalanga, a polar bear in captivity in a zoo in Denmark, South African elephants in the
San Diego Zoo, a porn site that allows voyeurs to watch a ‘Latino babe’ sleeping and waking
as an enticement to engage in a paid Skype call. Bull’s fascination with the human animal
took her to animal and human sites alike. With the accelerated advance of late capitalism,
digital culture and animal life have come to occupy a precarious position of binary opposition
– dematerialised technologies versus embodied sentience. Here, they are filtered through
each other.
Working with voyeuristic sites, she observed human subjects moving around their
apartments. Avoiding enticements to pay a fee and enter the zone of the bedroom, she
watched them doing mundane things in their lounges and kitchens. ‘I became fascinated by
the sense of time, watching and waiting in a way that was akin to waiting for the movement
of animals at the watering hole. When you are game watching, you are waiting for something
to happen. When it did, I would attempt to capture it.’ Positioning herself as interpretive
voyeur, Bull reintroduces an animate aspect into the incorporeal realm of the digital,
investing traces of the digital with gestural, physical life.
Filtered through the artist’s perceiving mind and moving body, these human and animal
projections register on the cloth surface as phantom presences. The images have an
ephemeral quality. The colours are muted. There is a sense of impossibility encoded into
their surfaces – of the failure to fully capture something in time. In some instances, the
mark-making is repetitive and fevered, transmitting a sense of fervour or anxiety in the
attempt to record something that is slipping away, becoming extinct in the very instant of
contact.
What we encounter are analogue residues of these real-time recordings – sketchy, hovering,
abstract maps of gesture and intermittent movement. A new form of semiotic transmission,
Bull’s drawings and paintings evoke the glow and sleekness of the digital screen. In the same
breath, they have an ancient hieroglyphic quality about, recalling cave paintings or glyphs
carved into rock. They bring the digital and ancient into an intriguing visual conversation.
(Exhibition text by Alexandra Dodd) 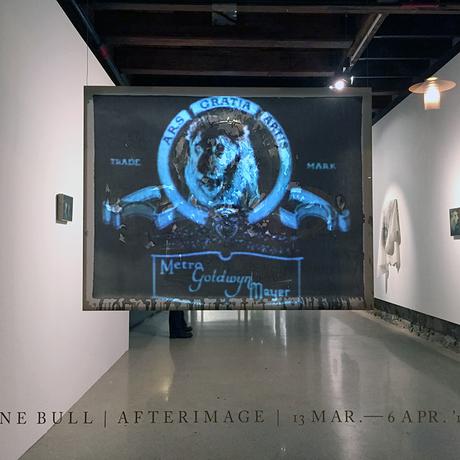 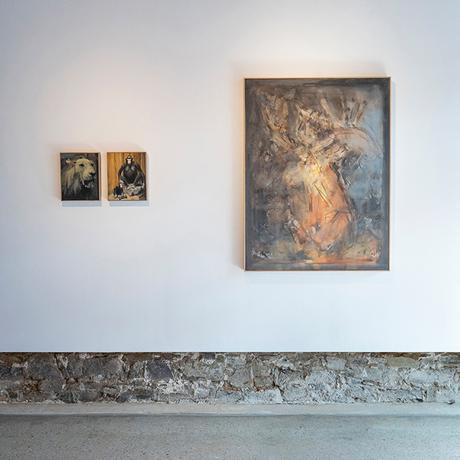 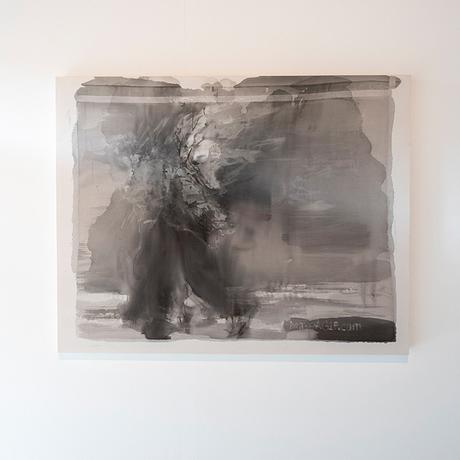 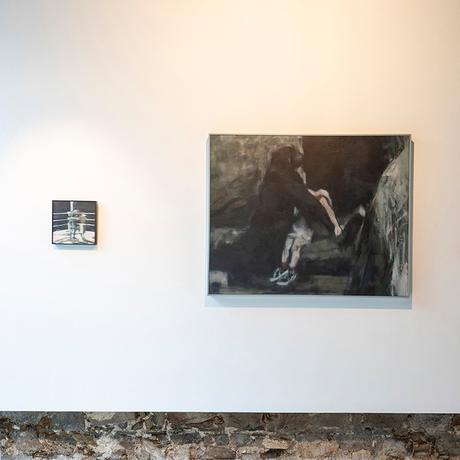 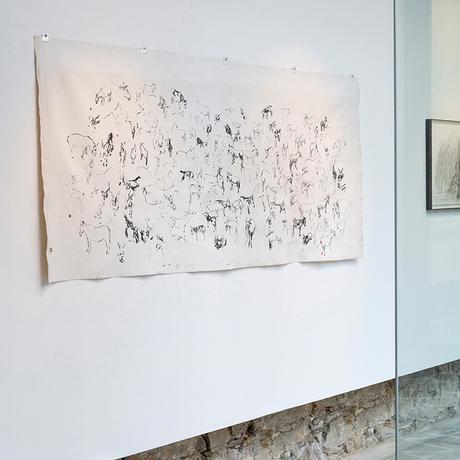 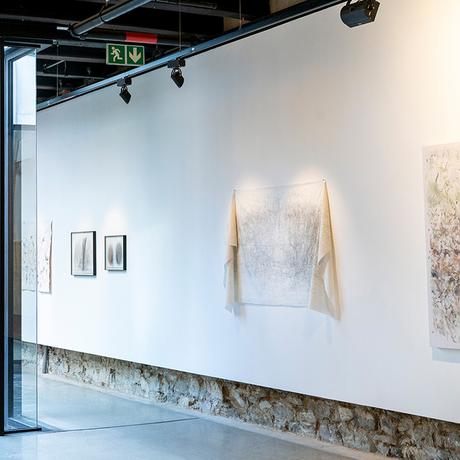 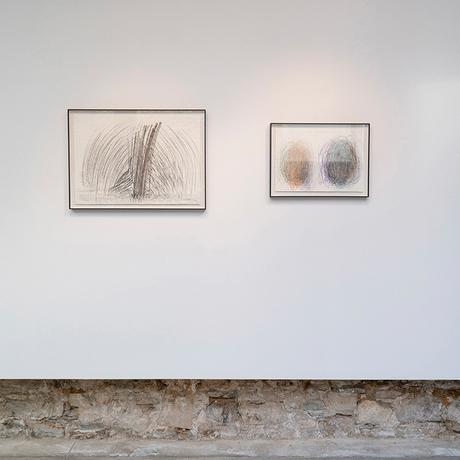 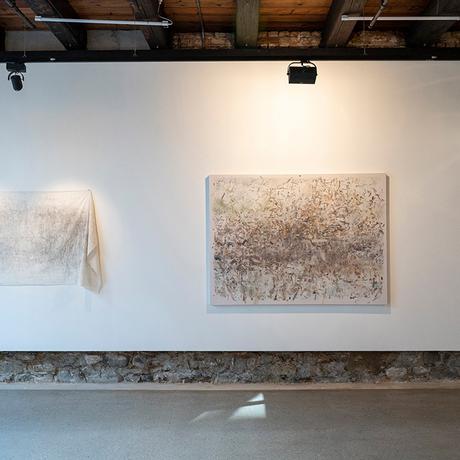 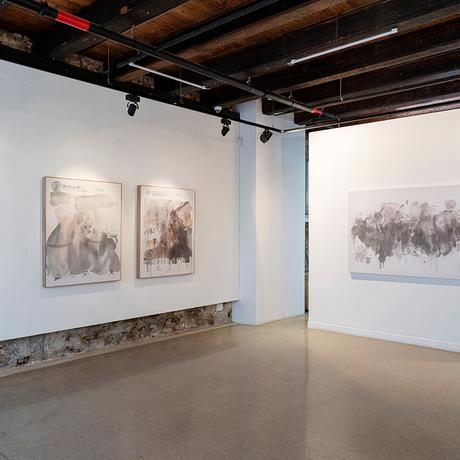 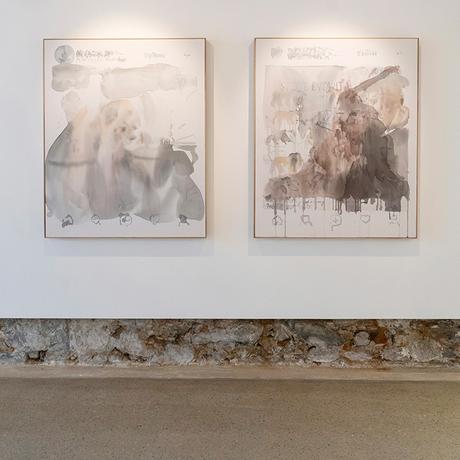 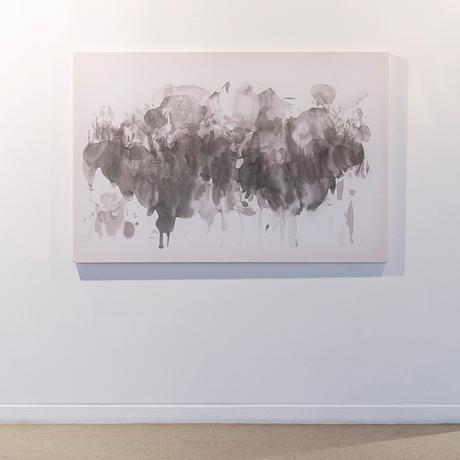 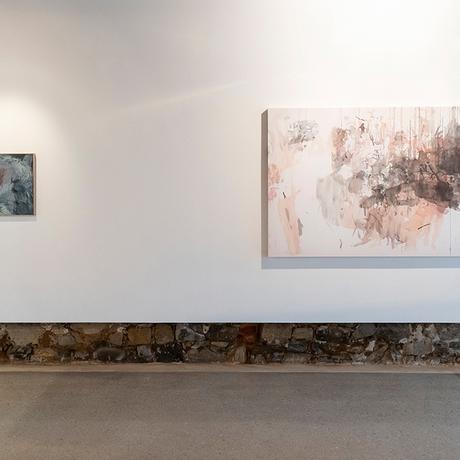 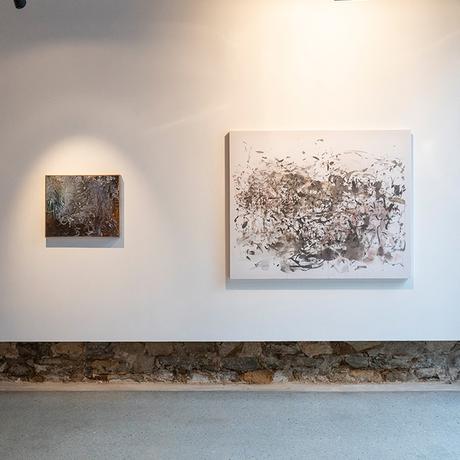 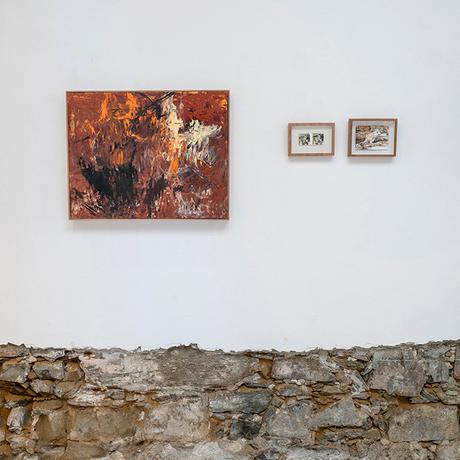 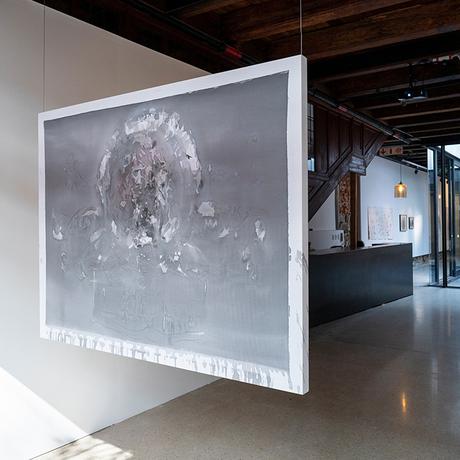 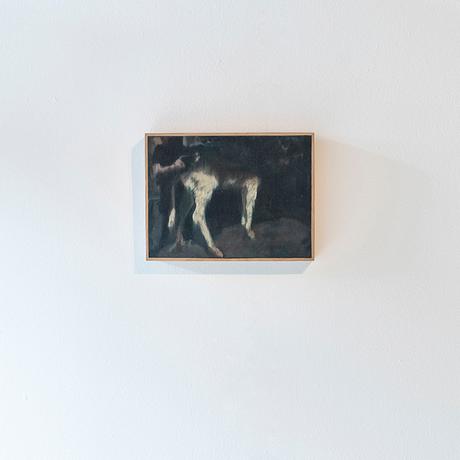 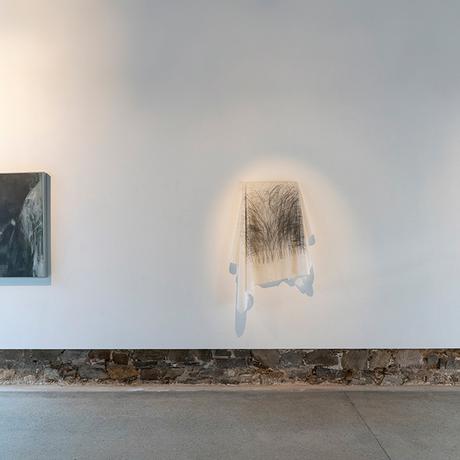 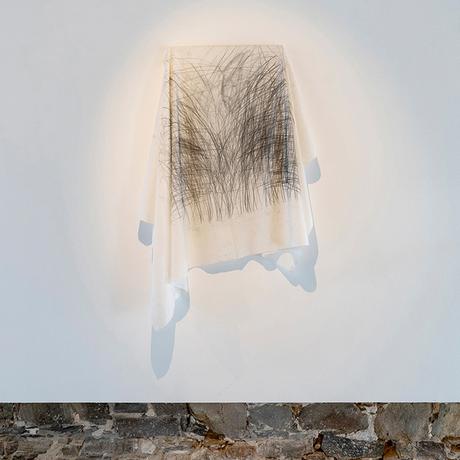 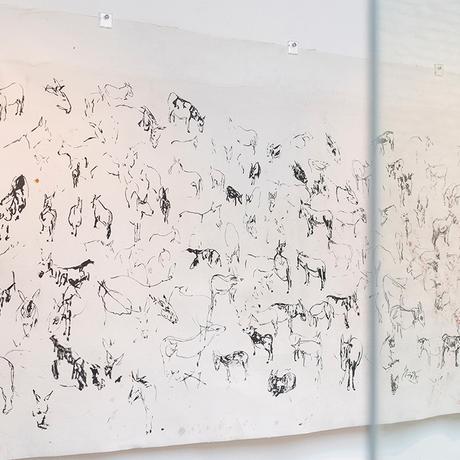 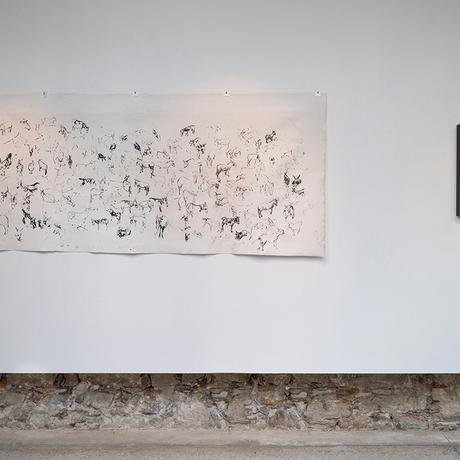 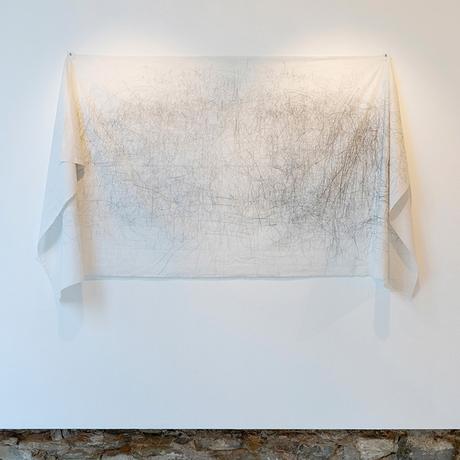 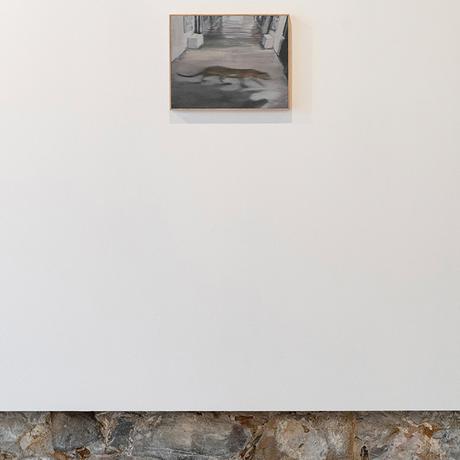 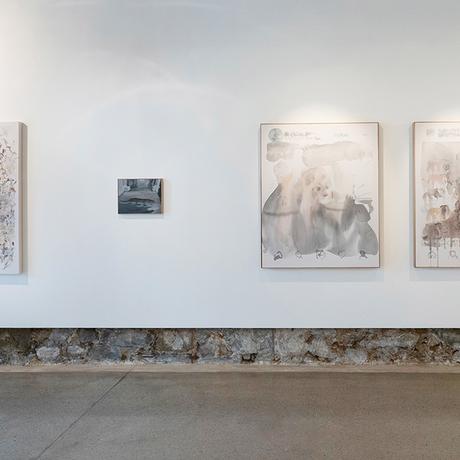 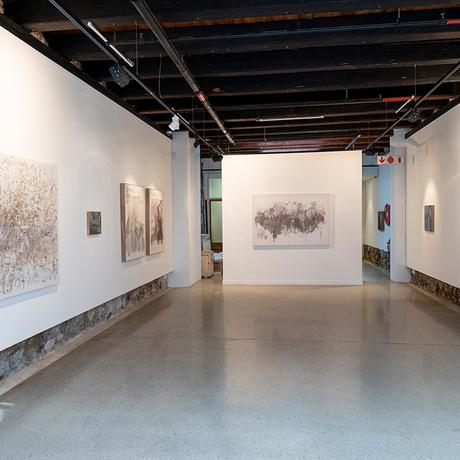 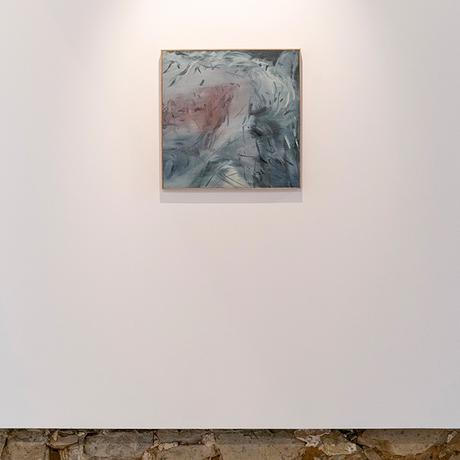 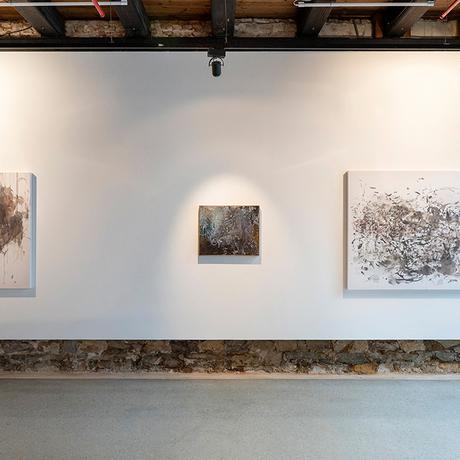 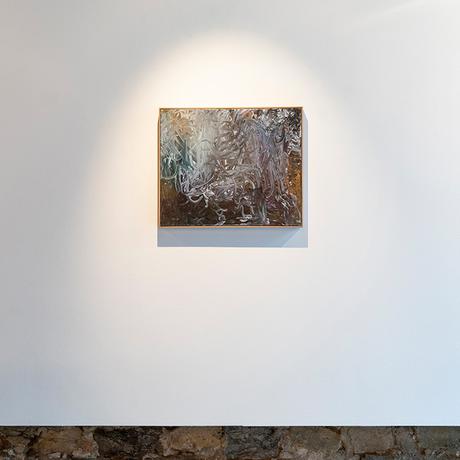